How to execute an object file: Part 1 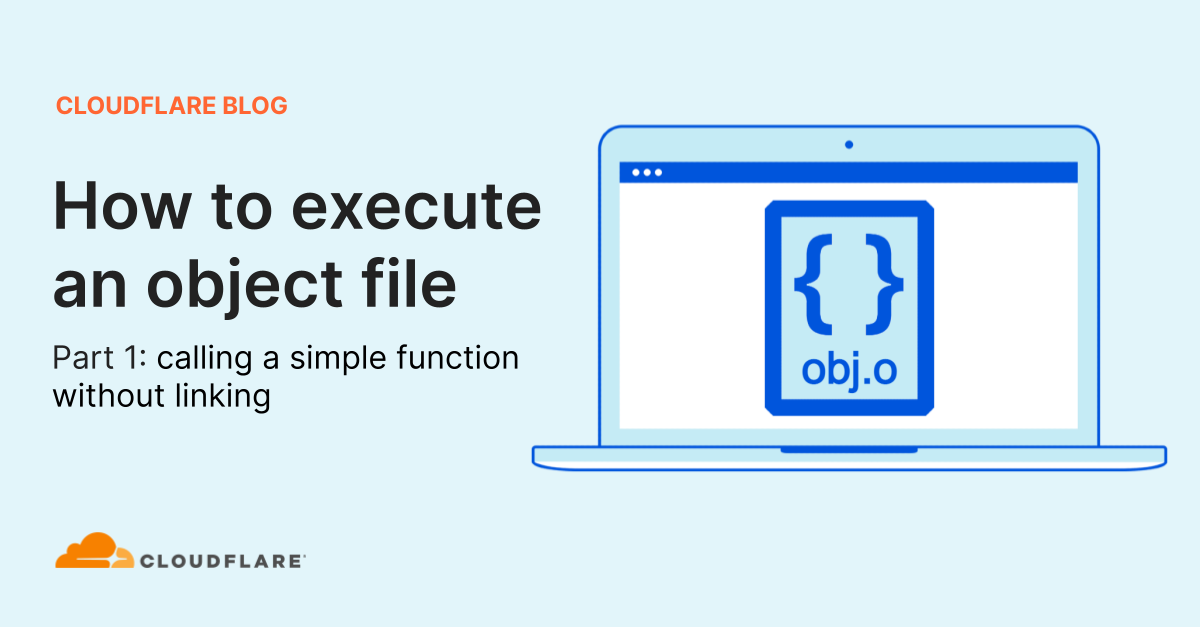 Calling a simple function without linking

When we write software using a high-level compiled programming language, there are usually a number of steps involved in transforming our source code into the final executable binary: 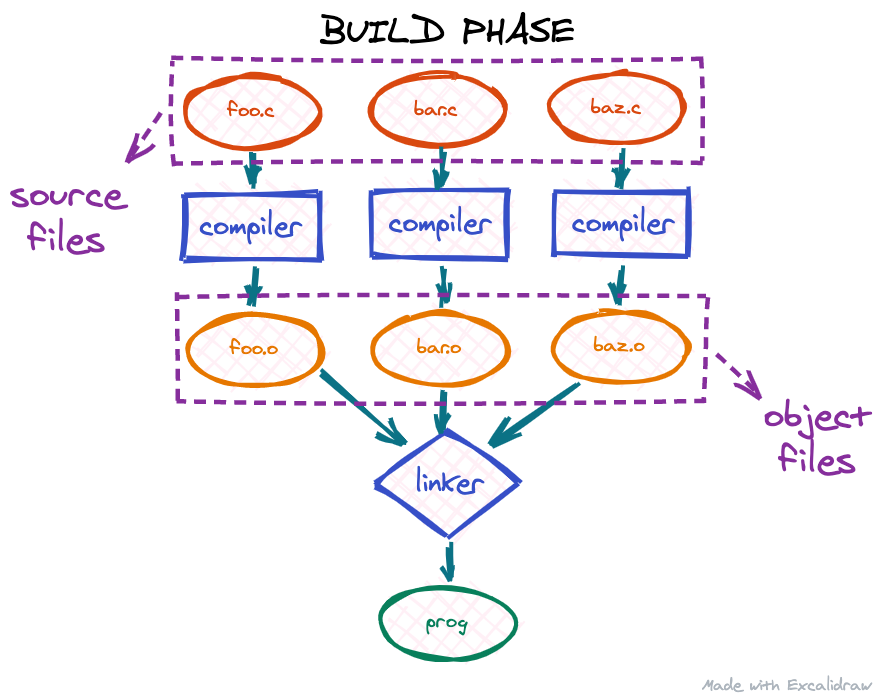 First, our source files are compiled by a compiler translating the high-level programming language into machine code. The output of the compiler is a number of object files. If the project contains multiple source files, we usually get as many object files. The next step is the linker: since the code in different object files may reference each other, the linker is responsible for assembling all these object files into one big program and binding these references together. The output of the linker is usually our target executable, so only one file.

However, at this point, our executable might still be incomplete. These days, most executables on Linux are dynamically linked: the executable itself does not have all the code it needs to run a program. Instead it expects to “borrow” part of the code at runtime from shared libraries for some of its functionality: 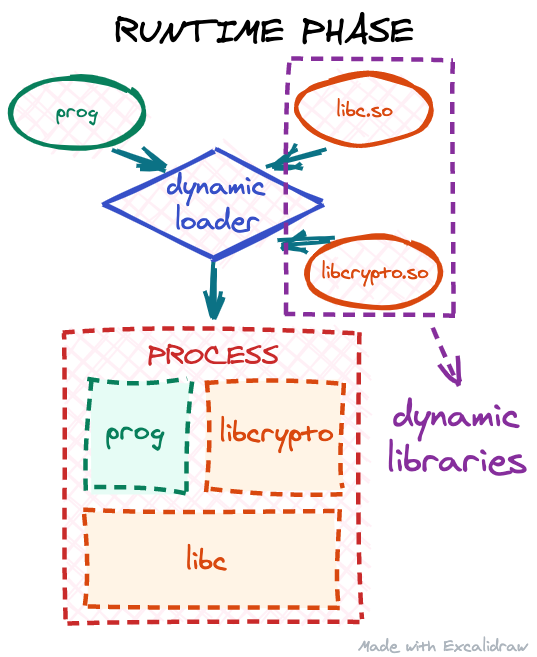 This process is called runtime linking: when our executable is being started, the operating system will invoke the dynamic loader, which should find all the needed libraries, copy/map their code into our target process address space, and resolve all the dependencies our code has on them.

One interesting thing to note about this overall process is that we get the executable machine code directly from step 1 (compiling the source code), but if any of the later steps fail, we still can’t execute our program. So, in this series of blog posts we will investigate if it is possible to execute machine code directly from object files skipping all the later steps.

Why would we want to execute an object file?

There may be many reasons. Perhaps we’re writing an open-source replacement for a proprietary Linux driver or an application, and want to compare if the behaviour of some code is the same. Or we have a piece of a rare, obscure program and we can’t link to it, because it was compiled with a rare, obscure compiler. Maybe we have a source file, but cannot create a full featured executable, because of the missing build time or runtime dependencies. Malware analysis, code from a different operating system etc – all these scenarios may put us in a position, where either linking is not possible or the runtime environment is not suitable.

For the purposes of this article, let’s create a simple toy object file, so we can use it in our experiments:

Our source file contains only 2 functions, add5 and add10, which adds 5 or 10 respectively to the only input parameter. It’s a small but fully functional piece of code, and we can easily compile it into an object file:

Now we will try to import the add5 and add10 functions from the object file and execute them. When we talk about executing an object file, we mean using an object file as some sort of a library. As we learned above, when we have an executable that utilises external shared libraries, the dynamic loader loads these libraries into the process address space for us. With object files, however, we have to do this manually, because ultimately we can’t execute machine code that doesn’t reside in the operating system’s RAM. So, to execute object files we still need some kind of a wrapper program:

Above is a self-contained object loader program with some functions as placeholders. We will be implementing these functions (and adding more) in the course of this post.

First, as we established already, we need to load our object file into the process address space. We could just read the whole file into a buffer, but that would not be very efficient. Real-world object files might be big, but as we will see later, we don’t need all of the object’s file contents. So it is better to mmap the file instead: this way the operating system will lazily read the parts from the file we need at the time we need them. Let’s implement the load_obj function:

If we don’t encounter any errors, after load_obj executes we should get the memory address, which points to the beginning of our obj.o in the obj global variable. It is worth noting we have created a special union type for the obj variable: we will be parsing obj.o later (and peeking ahead – object files are actually ELF files), so will be referring to the address both as Elf64_Ehdr (ELF header structure in C) and a byte pointer (parsing ELF files involves calculations of byte offsets from the beginning of the file).

A peek inside an object file

To use some code from an object file, we need to find it first. As I’ve leaked above, object files are actually ELF files (the same format as Linux executables and shared libraries) and luckily they’re easy to parse on Linux with the help of the standard elf.h header, which includes many useful definitions related to the ELF file structure. But we actually need to know what we’re looking for, so a high-level understanding of an ELF file is needed.

Segments (also known as program headers) and sections are probably the main parts of an ELF file and usually a starting point of any ELF tutorial. However, there is often some confusion between the two. Different sections contain different types of ELF data: executable code (which we are most interested in in this post), constant data, global variables etc. Segments, on the other hand, do not contain any data themselves – they just describe to the operating system how to properly load sections into RAM for the executable to work correctly. Some tutorials say “a segment may include 0 or more sections”, which is not entirely accurate: segments do not contain sections, rather they just indicate to the OS where in memory a particular section should be loaded and what is the access pattern for this memory (read, write or execute): 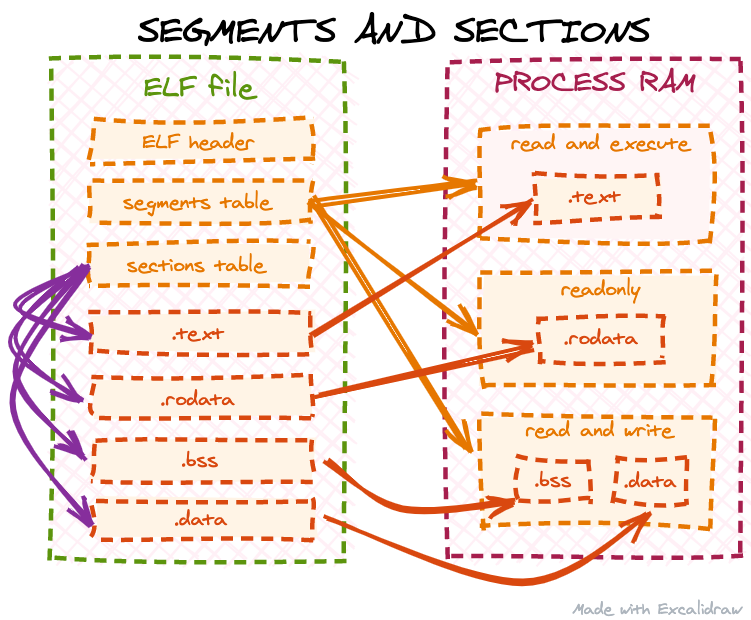 Furthermore, object files do not contain any segments at all: an object file is not meant to be directly loaded by the OS. Instead, it is assumed it will be linked with some other code, so ELF segments are usually generated by the linker, not the compiler. We can check this by using the readelf command:

The same readelf command can be used to get all the sections from our object file:

There are different tutorials online describing the most popular ELF sections in detail. Another great reference is the Linux manpages project. It is handy because it describes both sections’ purpose as well as C structure definitions from elf.h, which makes it a one-stop shop for parsing ELF files. However, for completeness, below is a short description of the most popular sections one may encounter in an ELF file:

At this point, we know that the code we want to import and execute is located in the obj.o‘s .text section. But we have two functions, add5 and add10, remember? At this level the .text section is just a byte blob – how do we know where each of these functions is located? This is where the .symtab (the “symbol table”) comes in handy. It is so important that it has its own dedicated parameter in readelf:

Let’s ignore the other entries for now and just focus on the last two lines, because they conveniently have add5 and add10 as their symbol names. And indeed, this is the info about our functions. Apart from the names, the symbol table provides us with some additional metadata:

So now we have all the pieces on how to parse an ELF file and find the functions we need.

Finding and executing a function from an object file

Given what we have learned so far, let’s define a plan on how to proceed to import and execute a function from an object file:

Let’s start by adding some more global variables and implementing the parse_obj function:

Now that we have references to both the sections table and the .shstrtab section, we can lookup other sections by their name. Let’s create a helper function for that:

Using our new helper function, we can now find the .symtab and .strtab sections:

Next, let’s focus on the .text section. We noted earlier in our plan that it is not enough to just locate the .text section in the object file, like we did with other sections. We would need to copy it over to a different location in RAM with executable permissions. There are several reasons for that, but these are the main ones:

To create a page aligned copy of the .text section, first we actually need to know the page size. Many programs usually just hardcode the page size to 4096 (4 kilobytes), but we shouldn’t rely on that. While it’s accurate for most x86 systems, other CPU architectures, like arm64, might have a different page size. So hard coding a page size may make our program non-portable. Let’s find the page size and store it in another global variable:

Notice, we have also added a convenience function page_align, which will round up the passed in number to the next page aligned boundary. Next, back to the .text section. As a reminder, we need to:

Here is the implementation of the above steps:

Now we have all the pieces we need to locate the address of a function. Let’s write a helper for it:

And finally we can implement the execute_funcs function to import and execute code from an object file:

Let’s compile our loader and make sure it works as expected:

Voila! We have successfully imported code from obj.o and executed it. Of course, the example above is simplified: the code in the object file is self-contained, does not reference any global variables or constants, and does not have any external dependencies. In future posts we will look into more complex code and how to handle such cases.

Processing external inputs, like parsing an ELF file from the disk above, should be handled with care. The code from loader.c omits a lot of bounds checking and additional ELF integrity checks, when parsing the object file. The code is simplified for the purposes of this post, but most likely not production ready, as it can probably be exploited by specifically crafted malicious inputs. Use it only for educational purposes!

The complete source code from this post can be found here.

Location-based personalization at the edge with Cloudflare Workers