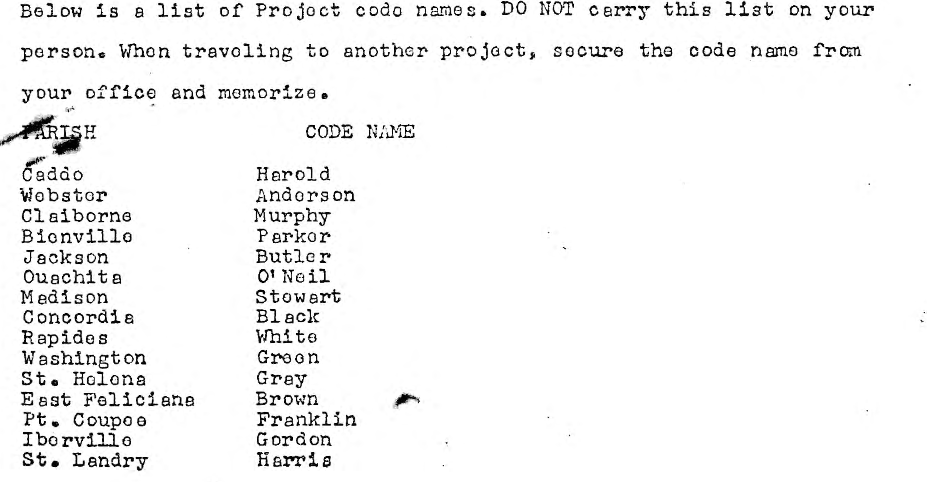 It’s nearing the end of Black History Month, and that history is inherently tied to strife, resistance, and organizing related to government surveillance and oppression. Even though programs like COINTELPRO are more well-known now, the other side of these kinds of stories are the ways the Black community has fought back through intricate networks and communication aimed at avoiding surveillance.

The Trans-Atlantic Slave Trade was as a dark, cruel time in the history of much of the Americas. The horrors of slavery still casts their shadow through systemic racism today. One of the biggest obstacles enslaved Africans faced when trying to organize and fight was the fact that they were closely watched, along with being separated, abused, tortured, and brought onto a foreign land to work until their death for free. They often spoke different languages from each other, with different cultures, and beliefs. Organizing under these conditions seemed impossible. Yet even under these conditions including overbearing surveillance, they developed a way to fight back. Much of this is attributed to the brilliance of these Africans using everything they had to develop communications with each other under chattel slavery. The continued fight today reflects much of the history that was established from dealing with censorship and authoritarian surveillance.

“The white folks down south don’t seem to sleep much, nights. They are watching for runaways, and to see if any other slaves come among theirs, or theirs go off among others.” – Former Runaway, Slavery’s Exiles – Sylviane A. Diouf

As Sylvane Diouf chronicled in the book, Slavery’s Exiles, slavery was not only catastrophic for many Africans, but also thankfully never a peaceful time for white owners and overseers either. Those captured from Africa and brought to the Americas seldom gave their captors a night of rest. Through rebellion, resistance, and individual sabotage with everyday life during this horrible period, freedom remained an objective. And with that objective came a deep history of secret communications and cunning intelligence.

Runaways often returned to plantations at night for years unnoticed and undetected, mostly to stay connected to family or relay information. One married couple, as Diouf tells it,  had a simple yet effective signaling system where the wife placed a garment in a particular spot that was visible from her husband’s covert. Ben and his wife (whose name is unknown) had other systems in place if it was too dark to see. For example, shining a bright light through the cracks in their cabin for an instant, and then repeating it at intervals of two or three minutes, three or four times.

These close-proximity runaways were deemed “Borderland Maroons”. They’d create tight networks of communication from plantation to plantation. Information, like the amount of reward for capture and punishment, traveled quickly through the grapevine of the Borderland Maroons. Based on this intelligence, many would make plans around either traveling away completely or staying around longer to gather others. Former Georgia Delegates from the Continental Congress recounted:

“The negroes have a wonderful art of communicating intelligence among themselves, it will run several hundred miles in a week or fortnight”

These networks often gained runaways years out of captivity and thus the ability to maintain a network among the enslaved. Coachmen, draymen, boatmen, and others who were allowed to move around off plantations were the backbone for this chain of intelligence. The shadow network of the Borderlands was the entry point of organizing for potential runaways. So even if someone was captured, they could tap into this network again later. No one would be getting rest or sleep. As Diouf recounts, keeping a high level of surveillance took a lot of resources from the slaveholders, and that fact was well-exploited by the enslaved.

Perhaps the most famous artisan of secret communications during this period is the venerable Harriet Tubman. Her character and will is undisputed, and her impeccable timing and remarkable intuition strengthened the Underground Railroad.

Dr. Bryan Walls notes much of her written and verbal communication was through plain language that acted as a metaphor:

The most famous example of verbal communication on plantations was the usage of song. The tradition of verbal history and storytelling remained strong among the enslaved, and acted as a way to “hide in plain sight”. Tubman said she changed the tempo of the songs to indicate whether it was safe to come out or not.

Harriet Tubman’s famous claim is “she never lost a passenger.” This rang true not only as she freed others, but also when she acted as a spy during the Civil War aiding the Union. As the first and only woman to organize and lead a military operation during the Civil War, her reputation was solidified as an expert in espionage. Her information was so detailed and accurate it often saved Black troops in the Union from harm.

Many of these tactics won’t be found written down, but passed verbally. It was illegal or prohibited for Black people to read and write. Therefore, it was a lethal risk to write more traditional ciphertext as communications.

Even though language was a barrier in the beginning and written communication was out of the question, over time English was forced onto enslaved Africans and many found a way to each other by creating an entirely new language on their own—Creole. There are many different kinds of Creole across the African Diaspora, which served as not only a way to communicate and develop a “home” language-wise, but also a way to communicate information to each other under the eyes of overseers.

“Anglican clergy were still reporting that Africans spoke little or no English but stood around in groups talking among themselves in “strange languages”. ([Lorena] Walsh 1997:96–97)  –  Notes on the Origins and Evolution of African American Language

Coded Resistance in the African Diaspora

Of course, resistance against slavery didn’t just occur in the U.S., but also in Central and South America. Under domineering surveillance, many tactics had to be devised quickly and planned under the eye of white supremacy. Quilombos, or what can be viewed as the “Maroons” of Brazil, developed a way to fight against the Portuguese rule of that time:

“Prohibited from celebrating their cultural customs and strictly forbidden from practicing any martial arts, capoeira is thought to have emerged as a way to bypass these two imposing laws.” – Disguised in Dance: The Secret History of Capoeira

The rebellions in Jamaica, Haiti, and Mexico had extensive planning. They were not, as they are sometimes portrayed, merely the product of spontaneous and rightful rage against their oppressors. Some rebellions, such as Tacky’s War in Jamaica, were documented to be in the works for over a year before the first strike.

As technology progressed, the oppressed adapted. During the height of the Civil Rights Movement, radio became an integral part of informing supporters of the movement. While churches may have been centers of gathering outside of worship, the radio was present even in these churches to give signals and other vital info. As Brian Ward notes in Radio and the Struggle for Civil Rights in the South, this info was conveyed in covert ways as well. Such as reporting traffic jams to indicate police roadblocks.

Radio made information accessible to those who could not afford newspapers or who were denied access to literacy education due to Jim Crow. Black DJs relayed information about protests, misinformation, and police checkpoints. Keeping the community informed and as safe as possible became these DJ’s mission outside of music and propelled them into civic engagement, from protest to walking new Black voters through the voting procedure and system. Radio became a central place to enter a different world past Jim Crow.

Wide Area Telephone Services (WATS) also became a vital tool for the Civil Rights Movement to disperse information during important moments that often meant life or death. To circumvent the monopolistic Bell System (“Ma Bell”) that only employed white operators and colluded with law enforcement, vital civil rights organizations used WATS phone lines. These numbers were dedicated and paid lines such as 800 numbers. Directly patching through to organizations like the Student Nonviolent Coordinating Committee (SNCC), Congress of Racial Equality (CORE), Council of Federated Organizations (COFO), and the Southern Christian Leadership Conference (SCLC). These organization’s bases had code names to refer to when relaying information to another base either via WATS or radio. 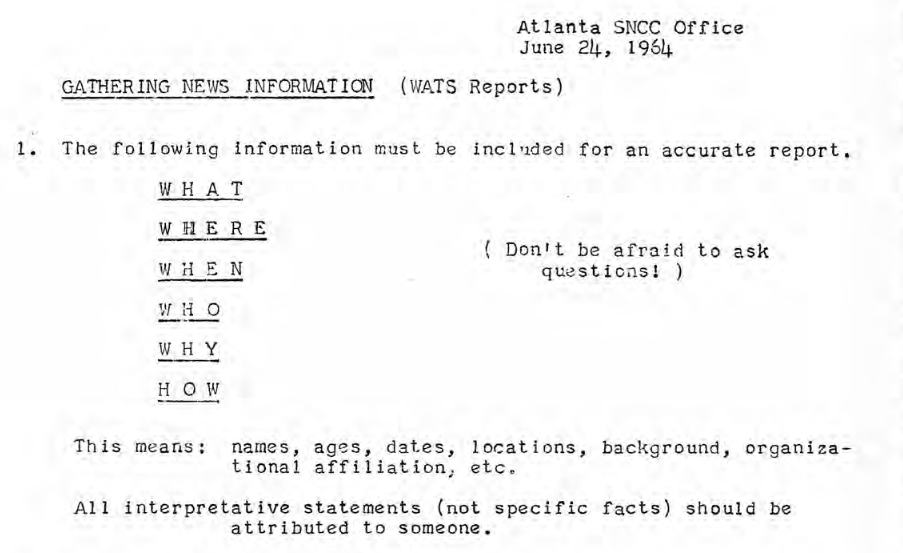 While Black and other marginalized communities still struggle to communicate despite surveillance, we do have digital tools to help. With encryption widely available, we can now use protected communications with each other for sensitive information. Of course, not everyone today is free to roam or use these services equally. Encryption itself is also under constant risk of being undermined in different areas of the world. Technology can feel nefarious and “Big Tech” seems to have a constant eye on millions.

In addition, just as with the DJs of the past, current activists like Black Lives Matter are used this hypervisibility under Big Tech to get police brutality highlighted in the mainstream conversation and in real life. The world has seen police brutality up close because of on-site video, live recordings from phones and police scanners. Databases like EFF’s Atlas of Surveillance increasingly map police technology in your city.  And all of us, whether activists or not, can use tools to scan for the probing of communications during protests. 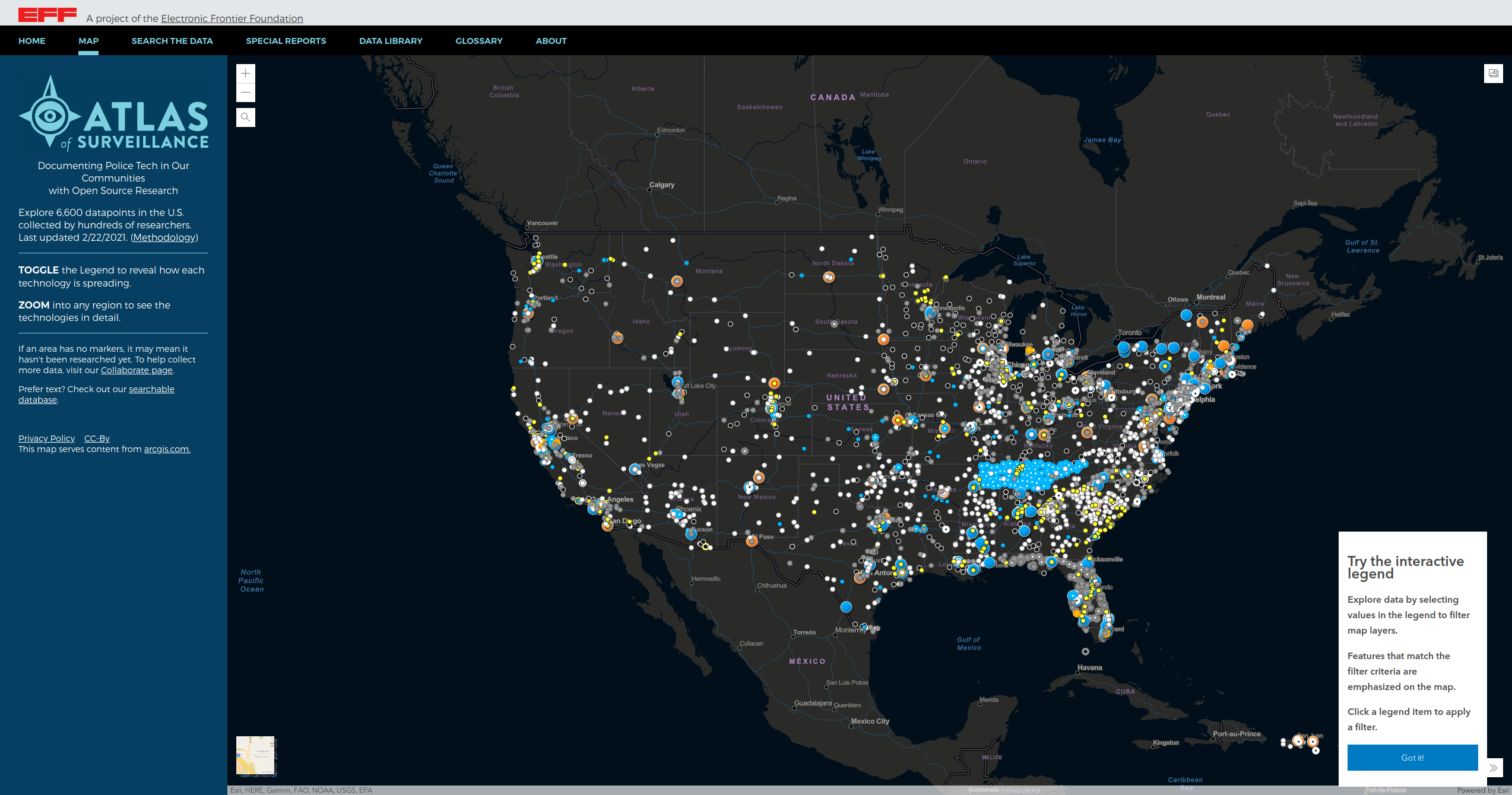 The Black community has been fighting what essentially is the technological militarization of the police force since the 1990s. While the struggle continues, we have seen recent wins where police use of facial recognition technology is now being limited or banned in many areas in the U.S., with support from groups around the country, we can help close this especially dangerous window of surveillance.

Being able to communicate with each other and organize is embedded in the roots of resistance around the world, but it has a long and important history in the Black community in the United States. Whether online or off, we are keeping a public eye on those who are sworn to serve and protect us, with the hope one day we can freely move without the chains of surveillance and white supremacy. Until then, we’ll continue to see, and to celebrate, the spirit of resistance as well as the creativity of efforts to build and keep a strong line of communication despite surveillance and repression.

The IAEA investigates the Natanz incident (amid conflicting reports on the nature of the sabotage). Mopping up the SolarWinds Exchange Server hacks.

US Sanctions Russia and Expels 10 Diplomats Over SolarWinds Cyberattack