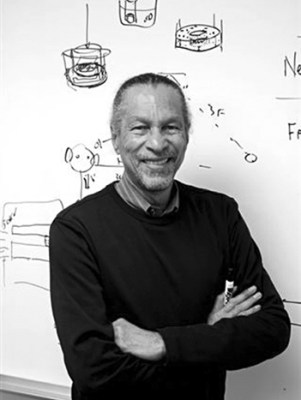 I’d be surprised if you weren’t sitting within fifty feet of one of James Edward Maceo West’s most well-known inventions — the electret microphone. Although MEMS microphones have seen a dramatic rise as smartphone technology progresses, electret microphones still sit atop the throne of low-cost and high-performance when it comes to capturing audio. What’s surprising about this world-changing invention is that the collaboration with co-inventor Gerhard Sessler began while James West was still at university, with the final version of the electret springing to life at Bell Labs just four years after his graduation.

James’ approach to learning sounds very familiar: “If I had a screwdriver and a pair of pliers, anything that could be opened was in danger. I had this need to know what was inside.” He mentions a compulsive need to understand how things work, and an inability to move on until he has unlocked that knowledge. Born in 1931, an early brush with mains voltage started him on his journey.

Having found a radio in the trash, he set out to repair it. James describes the event by mentioning that this was in the days before houses had outlets in the walls; the only source of electricity was the light socket. He got up on a bed and when plugging in the radio, receiving a shock that prevented him from letting go to break the connection by himself. His older brother knocked him loose, and although he wasn’t seriously injured, he became determined to understand how electricity worked.

This curiosity made him a perfect helper for a cousin who was taking on jobs wiring up rural homes. During high school he was fascinated by the telephone system, but his parents forbade from using the phone without a serious reason for it. He and a friend stole wire from a telephone company lot, stringing a line between their houses. They made their own telephone system.

The Long Way to a Career in Physics

It’s obvious James had a strong interest in the sciences, yet his parents did not support this pursuit as a career path. Growing up in Virginia, Jim Crow laws and widespread racism meant these professions were closed off to black people.

His parents had power over the purse, so James entered school as pre-med. Their hope was that he would go into practice with his uncle who had built a clinic — but James did not enjoy it. His father was adamant that he stick to it or just not even bother going to school at all, going so far as to introduce James to two black men he knew who had earned their Ph.D but could not find employment.

In working to switch his major he dropped out of Wilberforce University mid-term in 1950 and was drafted into the Korean war before he could begin anew. Two years, and two purple hearts later, James was back from the war and entered Temple University where he studied Physics.

Applying en masse for interships posted on a bulletin board at school, James found his way to Murray Hill, the location of AT&T’s Bell Labs. He was assigned to the Acoustic Research department studying the interaural time delay. This is the difference in your left and right ear detecting sound, and it’s one way we locate the direction from which sounds originate.

The lab was using condenser microphone technology as headphones, but they put out a very very limited amount of sound and it was limiting research into the topic. James West found a German research paper on solid dielectric elements. He changed the test rig to use this technology, powering his new headphones with a 500 V battery (!). It worked, and his talent turned heads at the labs.

James went back to school in the fall with a spring in his step, but by November the research team was calling with a problem: the headphones had stopped working. They sent him a ticket to come back to Murray Hill and troubleshoot. Once again, the compulsion for understanding struck, leading him down a rabbit hole. This was the beginning of his march to unlock the secret of electrets, and in researching the phenomenon he began working with Gerhard Sessler. The two would go on to invent the electret microphone together.

Two microphone technologies were dominant at the time James West graduated from Temple in 1957, the carbon microphone and the condenser microphone. Condenser mics had a far superior sound, but they use charged plates that require a very high potential of a few hundred volts. This wouldn’t work with the telephone system unless a battery or other source were added to the handset, so AT&T’s telephone system continued to use the older carbon microphone technology.

Ultimately the work that West and Sessler did is a story of material science. (This is a recurring theme for Bell Labs inventions, I highly recommend reading The Idea Factory for a deeper dive into this). Their electret design uses a diaphragm made of a metal-coated polymer film that was able to reliably trap a charge and retain it permanently. It delivered the qualities of the condenser mics but didn’t require recharging the plates. Even better, it did it at a fraction of the price. James West explains this in his own words during a fantastic set of video interviews conducting by The History Makers in 2013 (free to watch but registration required):

…when we published in 1962, we were confident from the experiments we had done in the lab, that we had learned to trap charge in this material. And that the activation energy, how much energy you had to apply to that trap to open up, was very high, 150 degrees C, okay. Which meant that we could extrapolate the lifetime at room temperature, from what we call Arrhenius plots, that said that the lifetime at room temperature of that electret would be two, three, four hundred years.

Electret microphones could be manufactured at up to four orders of magnitude less than existing condenser mics, completely solved the problem of high bias voltages, lasted an incredibly long time over a huge range of operating temperatures, and they’re quite small. They were nothing short of an astounding breakthrough. By the 1970’s they were popping up in consumer products, and have been the go-to technology for decades since. For more background on electret microphones, check out Jenny List’s article from last year.

James continued on at Bell Labs for more than four decades. During that time he published prolifically in journals and books, and awarded more than two hundred patents. Looking back on his time there, he mentions that the open-endedness of the work — being able to pursue problems he was interested in and work with others across different disciplines — kept him perpetually engaged in each of his pursuits.

A Leader for Inclusive and Equitable Organizations

James West’s mother, Matilda Omega Miller West, was one of the people featured in the book Hidden Figures. She worked as a mathematician (at the time they were known as computers) for Langley Research Center. Matilda was an officer in the NAACP, and James recalls her losing her job because of Senator Joseph McCarthy‘s view of that organization as adverse and communist. James’ own career might not have happened if he had heeded advice at the time pointing to a lack of opportunity for black people in the sciences. It’s no surprise that he wants to break down these barriers to entry for others following after him. During his tenure at Bell, and since retiring and joining the faculty at Johns Hopkins University in 2001, he has been a strong advocate for fostering diversity in all walks of our society.

In an inverview with Acoustics Today from last September, James discusses his approach to encouraging inclusivity in the STEM fields. Acknowledging the absences of women and underrepresented minorities (W&URM in the quote below) as a problem, one way to enact change is through mentorship. He tells the story of a Baltimore Public Schools STEM initiative that had very low diversity when he joined the board of directors, but with a few years of work the students in the program now more closely reflect the actual demographics of the community:

To make a long story short, the funnel was empty, and the funnel needs to be filled, or at least partially, with qualified W&URM people that want to enter STEM. If you can increase and open that pipeline that will only bring positive change. How can you help? Find and mentor qualified W&URM students in your local area and improve their training so that they have the opportunity and potential for a future in STEM.

How different would the world have been if James had finished that medical degree? As co-inventor of the electret microphone he made a huge impact and has been recognized many times over for it. He has received honorary doctorates from the New Jersey Institute of Technology, Michigan State, U Penn, Princeton, and Temple. In 2006, President George W. Bush awarded James the National Medal of Technology and Innovation, just one of numerous awards he has received.

At the age of 89, he continues to pursue everything beyond his current understanding through his research at Johns Hopkins. His most recent patent was published in 2020 and applies electret technology to energy harvesting.

The IEEE Builds a Smart Watch

Is That A Cat Or Not?