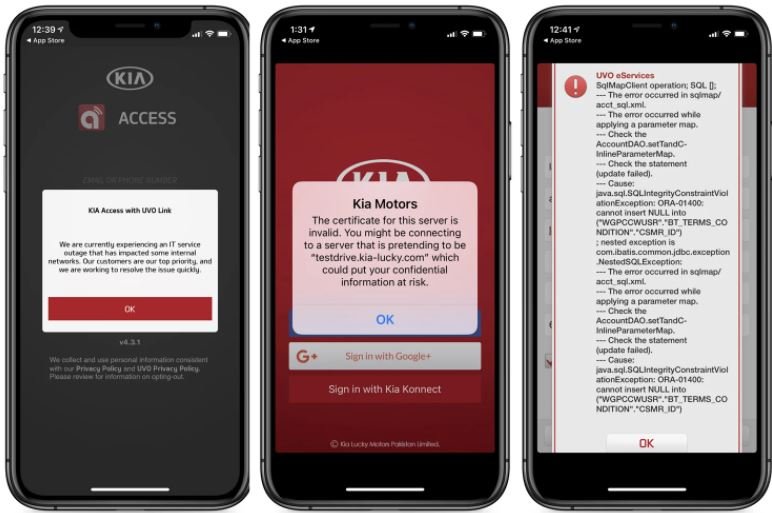 Automotive company Kia Motors is experiencing a failure of its entire IT infrastructure for the U.S., affecting telephone service, self-pay and dealer platforms. These errors began on Saturday morning, when an error message was placed on the Kia owner portal to report an outage in internal networks.

As of today the company operates without online service services, while its telephone lines mention that work is being made to resolve some issues with customer service servers. On the other hand, when calling Kia’s finance area users also encounter a pre-recorded message stating that the self-service option is unavailable due to a maintenance period.

Flaws are also present in all company applications, including ‘Kia Access with UVO Link’, ‘UVO eServices’ and ‘Kia Connect’. When trying to access these platforms, users receive all kinds of messages informing about service disruption.

Via email, a Kia representative contacted some representatives of the cybersecurity community to notify that it was a nationwide failure and that it even appeared to have impacted Kia Global Service Information System (KGSIS) and KDealer platform grantees.

While the company has maintained its official version from the outing, rumors of potential cyberattack soon arrived. Through their Twitter account, a user claimed that they were unable to pick up their car due to a service outage generated by a ransomware attack on Kia’s systems.

Despite rumors, other users or employees have not been identified making similar statements in the same way. On the other hand, cybersecurity experts believe that, taking into account the large number of computer and telephone systems interrupted since the weekend, it is highly likely that the company is implementing a maintenance period.

At the moment, what worries users and distributors most is that we are on the fourth day since the national failures began and Kia teams have not yet announced an estimated date for the restoration of their activities, which certainly contributes to the spread of rumors about a potential cybersecurity incident , fears that are not actually unfounded considering the large number of ransomware attacks that every week affect public and private organizations in the United States and the rest of the world.

Top 5 Acting Forums, Discussions, and Message Boards You Must Follow in 2021

Top 5 Beard Forums, Discussions and Message Boards You Must Follow in 2021

Top 5 Language Learning Forums, Discussions, and Message Boards You Must Follow in 2021

Top 5 English Language Forums, Discussions, and Message Boards You Must Follow in 2021