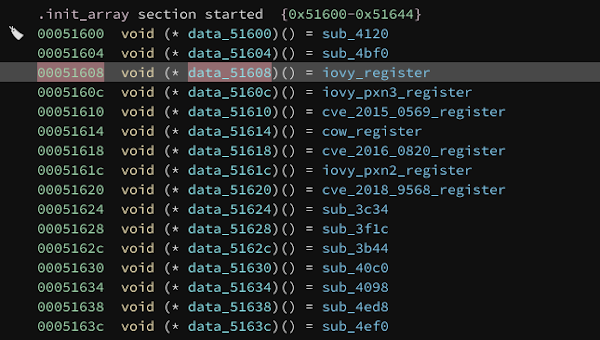 This is part 4 of a 6-part series detailing a set of vulnerabilities found by Project Zero being exploited in the wild. To read the other parts of the series, see the introduction post.

After one of the Chrome exploits has been successful, there are several (quite simple) stages of payload decryption that occur. Once we’ve got through that, we reach a much more complex binary that is clearly the result of some engineering work. Thanks to that engineering it’s very simple for us to locate and examine the exploits embedded inside! For each privilege elevation, they have a function in the .init_array which will register it into a global list which they later use — this makes it easy for them to plug-and-play additional exploits into their framework, but is also very convenient for us when reverse-engineering their framework:

Each of the “xyz_register” functions looks like the following, adding an entry to the global list with a probe function used to check whether the device is vulnerable to the given exploit, and to estimate likelihood of success, and an exploit function used to launch the exploit. These probe functions are then used to dynamically determine the best exploit to use based on runtime information about the target device.

Looking at the probe functions gives us an idea of which devices are supported, but we can already see something fairly surprising: this attacker is using entirely public exploits for their privilege elevations. Of course, we can’t tell for sure that they didn’t know about any of these bugs prior to the original public disclosures; but their exploit configuration structure contains an internal “name” describing the exploit, and those map very neatly to either public naming (“iovy”, “cow”) or CVE numbers (“0569”, “0820” for exploits targeting CVE-2015-0569 and CVE-2016-0820 respectively), suggesting that these exploits were very likely developed after those public disclosures and not before.

In addition, as we’ll see below, most of the exploits are closely related to public exploits or descriptions of techniques used to exploit the bugs — adding further weight to the theory that these exploits were implemented well after the original patches were shipped.

Of course, it’s important to note that we had a narrow window of opportunity during which we were capturing these exploit chains, and it wasn’t possible for us to exhaustively test with different devices and patch levels. It’s entirely possible that this attacker also has access to Android 0-day privilege elevations, and we just failed to extract those from the server before being detected. Nonetheless, it’s certainly an interesting data-point to see an attacker pairing a sophisticated 0-day exploit for Chrome with, well, a load of bugs patched between 2 and 5 years ago.

Anyway, without further ado let’s take a look at the exploits they did fit in here!

addr_limit pipe kernel read-write: By corrupting the addr_limit variable in the task_struct, this technique gives a user-mode process the ability to read and write arbitrary kernel memory by passing kernel pointers when reading to and writing from a pipe.

Userspace shellcode: PXN support on 32-bit Android devices is quite rare, so on most 32-bit devices it was/is still possible to directly execute shellcode from the user-mode portion of the address space. See KEEN Lab “Emerging Defense in Android Kernel” for more information.

Point to userspace memory: PAN support is not ubiquitous on 64-bit Android devices, so it was (on older Android versions) often possible even on 64-bit devices for a kernel exploit to use this technique. See KEEN Lab “Emerging Defense in Android Kernel” for more information.

CVE-2015-1805 is a vulnerability in the Linux kernel handling read/write for pipe iovectors, leading to the use of an out-of-bounds struct iovec.

CVE-2016-3809 is an information leak, disclosing the address of a kernel sock structure.

Subsequent flow: Use CVE-2016-3809 to leak the kernel address of a sock structure, then corrupt the socket member of the sock structure to point to userspace memory containing a fake structure (and function pointer table); execute userspace shellcode, elevating privileges.

Copy/Paste: ~90%. The exploit strategy is the same as public exploit code, and it looks like this was used as a starting point. The authors did some additional work, presumably to increase portability and stability, and the subsequent flow doesn’t match any existing public exploit (that I found), but all of the techniques are publicly known.

The vulnerabilities: Same as iovy, plus:
P0-822 is an information leak, allowing the reading of arbitrary kernel memory.

Strategy: Same as above.

Subsequent flow: Use CVE-2016-3809 to leak the kernel address of a sock structure, and use P0-822 to leak the address of the function pointer table associated with the socket. Then use P0-822 again to leak the necessary details to build a JOP chain that will clear the addr_limit. Corrupt one of the function pointers to invoke the JOP chain, giving the addr_limit pipe kernel read-write. Overwrite the cred struct for the current process, elevating privileges.

Copy/Paste: ~70%. The exploit strategy is the same as above, building the same primitive as the public exploit (addr_limit pipe kernel read-write). Instead of the public approach, they leverage the two additional vulnerabilities, which had public code available. It seems like the development of this exploit was copy/paste integration of the alternative memory-leak primitives, probably to increase portability. The code used for P0-822 is direct copy-paste (inner loop shown below). 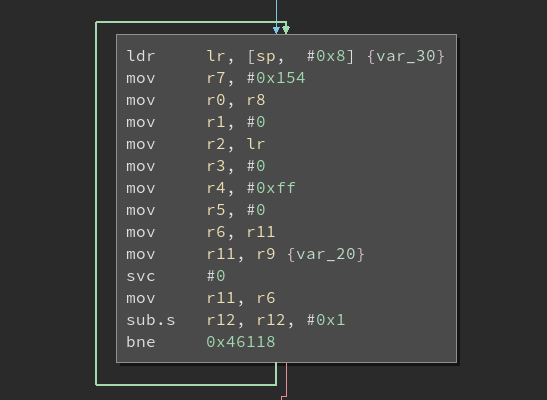 The vulnerabilities: Same as iovy.

Strategy: Heap-spray with pipe buffers. One thread each for read/write/readv/writev and the usual mmap/munmap thread. Modify all of the pipe buffers, and then run either “read and writev” or “write and readv” threads to get a reusable kernel read-write.

Subsequent flow: Use CVE-2016-3809 to leak the kernel address of a sock structure, then use kernel-read to leak the address of the function pointer table associated with the socket. Use kernel-read again to leak the necessary details to build a JOP chain that will clear the addr_limit. Corrupt one of the function pointers to invoke the JOP chain, giving the addr_limit pipe kernel read-write. Overwrite the cred struct for the current process, elevating privileges.

Copy/Paste: ~30%. The heap-spray technique is the same as another public exploit, but there is significant additional synchronization added to support multiple reads and writes. There’s not really enough unique commonality to determine whether the authors started with that code as a reference or not.

The vulnerability: According to the release notes, CVE-2015-0569 is a heap overflow in Qualcomm’s wireless extension IOCTLs. This appears to be where the exploit name is derived from; however as you can see at the Qualcomm advisory, there were actually 15 commits here under 3 CVEs, and the exploit appears to actually target one of the stack overflows, which was patched as CVE-2015-0570.

Copy/Paste: 0%. This bug is trivial to exploit for non-PXN targets, so there would be little to gain by borrowing code.

The vulnerability: CVE-2016-0820, a linear data-section overflow resulting from a lack of bounds checking.

Copy/Paste: ~20%. The only public code we could find for this is the PoC attached to our bugtracker – it seems most likely that this was an independent implementation written after KEEN lab’s presentation and based on their description.

Strategy: Depending on the system configuration their exploit will choose between using /proc/self/mem or ptrace for the write thread.

Subsequent flow: There are several different exploitation strategies depending on the target environment, and the full exploitation process here is a fairly complex state-machine involving several hops into different processes, which is likely necessary to support launching the exploit from within an isolated app context.

Copy/Paste: ~5%. The basic code necessary to exploit CVE-2016-5195 was probably copied from one of the many public sources, but the majority of the complexity here is in what is done next, and this doesn’t seem to be similar to any of the public Android exploits.

Copy/Paste: ~20%. The code doesn’t seem to match the publicly available exploit code for this bug, and it seems most likely that this was an independent implementation written after Baidu’s blog post and based on their description.

It certainly seems like they have the capability to write Android exploits. The exploits seem to be based on publicly available source code, and their implementations are based on exploitation strategies described in public sources.

One explanation for this would be that they serve different payloads depending on the targeting, and we were only receiving a “low-value” privilege-elevation capability. Alternatively,  perhaps exploit server URLs that we had access to were specifically configured for a user that they know uses an older device that would be vulnerable to one of these exploits?

Based on all the information available, it’s likely that they have more device-specific 0day exploits. We might just not have tested with a device/firmware version that they supported for those exploits and inadvertently missed their more modern exploits.

About the only solid conclusion that we can make is that attackers clearly still see value in developing and maintaining exploits for fairly old Android vulnerabilities, to the extent of supporting those devices long past when their original manufacturers provide support for them.

This is part 4 of a 6-part series detailing a set of vulnerabilities found by Project Zero being exploited in the wild. To continue reading, see In The Wild Part 5: Android Post-Exploitation.

Why smart homes are the future of the smart enterprise

Microsoft to integrate Teams with SAP as partnership expands

Is my battery likely causing my BSOD’s?